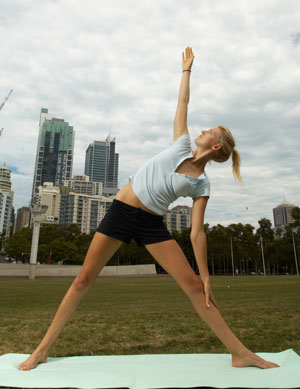 A recent study set out to determine whether yoga therapy can help alleviate pain in patients undergoing total knee-replacement surgery.

The study involved 51 patients undergoing total knee replacement (TKR) because of osteoarthritis. On the third day after surgery, baseline scores for pain and stiffness were taken. Half of the patients received conventional physiotherapy. The other half also received once-daily yoga asana treatment. Upon being discharged from the hospital, these patients were provided with photographs of the asanas and written instructions, and instructed to perform the movements 3 days per week.1

Yoga asanas are functional postures involving slow stretching and movements of muscles and joints, and encourage different muscle groups to achieve stability and equilibrium. The purpose of the study was to determine whether yoga asanas have an added advantage for treating patients who have undergone total knee replacement.

Patients were evaluated at 6 weeks and 3 months after surgery to measure their perception of pain, stiffness, and function. The researchers found lower pain and stiffness reported by the group receiving yoga therapy than for patients receiving conventional therapy alone. They concluded that patients practicing yoga had better pain relief, reduced stiffness, and better function, suggesting that yoga asanas may be a valuable addition to conventional post-surgery treatments.

Previous studies have recommended additional non-surgical approaches to reducing knee pain, particularly that resulting from osteoarthritis. Chiropractic adjustments have been shown to benefit patients with knee pain, who reported substantial drops in pain intensity and improvements in mobility, along with fewer clicking or grinding sensations within the knee.2 Weight loss has also been shown to alleviate chronic knee pain in obese patients.3 Consult with your doctor about relieving knee pain naturally.